Some years ago I foolishly listed my Great Western Railway Journal and Model Railway Journal collections for sale on eBay. Quite what possessed me to do so I can't really remember now but suffice it to say, I'm jolly glad they didn't sell.
Having since completed my collection of the entire publication run of GWRJ (the final issue of which was published in 2017) and having entertained the idea of getting them bound into proper volumes for some time, I finally got round to it and here is the result - quite stunning if I do say so myself! 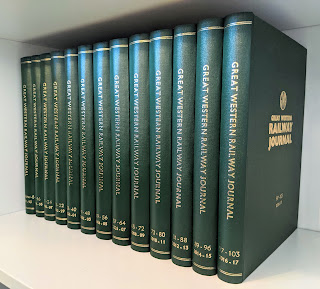 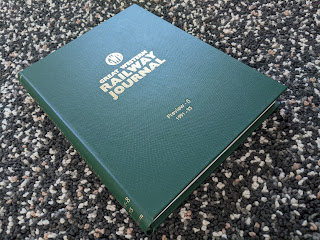 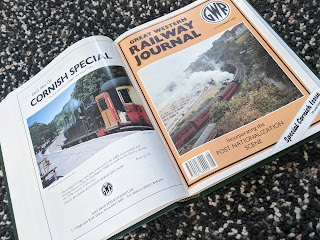 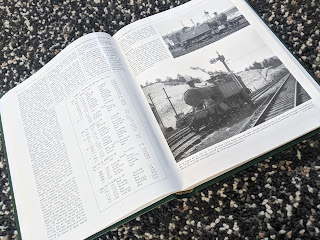 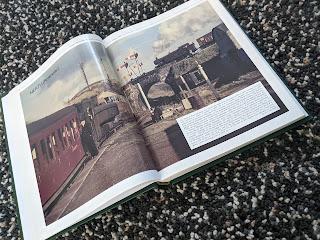 Phew, that's blown a few cobwebs away!
Posted by Matt at 2:28 pm No comments: 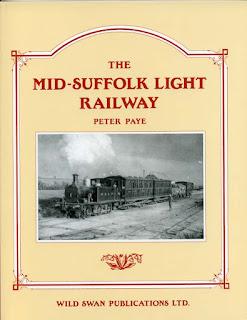 I recently purchased a second hand copy of Peter Paye's excellent book 'The Mid-Suffolk Light Railway' (Wild Swan, 1986). It's a superb book with a wealth of information and some wonderful and evocative photos of this charming and much-loved railway backwater.

If ever there was a line to nowhere, this is it. The original proposals for the railway were for some 50 route miles linking up with the existing GER network at 3 points and consisting of two connected 'branches'. In the end only 18 miles were constructed, ending at the relatively insignificant village of Laxfield in the middle of the Suffolk countryside - the 'middle of nowhere' to all intents and purposes.

Most of the tiny stations were located in the middle of open countryside and served small villages or hamlets several miles from the railway itself, and the line retained much of its old-world character right up to closure in the 1950s.

Although my primary interest has always been in the GWR / WR I have a definite soft spot for the GER / ER branch lines and byways. In fact anywhere that is a bit out of the way and off the beaten track really. Some people are inspired by images of crack express trains powering along the main line but that has never really inspired me so much as the rural backwater with its ancient rolling stock, weed-grown trackbeds and empty platforms.

Anyway, I can thoroughly recommend the book.
Posted by Matt at 12:24 pm No comments:

It's been nearly 4 years since I last posted on this blog (and to be honest I wasn't even sure whether I hadn't taken it offline ages ago - but clearly not) so whether anyone will read this I have no idea. But hello if you are! This feels a bit like the first tentative trip over a weed-grown, mothballed branch line after years of inactivity...

Over those 4 years I have had a chance to reflect on my then haste to discard or sell off my model railway assets and realised that it was the result of an all-or-nothing mentality that had characterised my approach to much in life up until quite recently.

Maybe it was turning 40 last year or something, but I have started to approach life a little differently lately, realising that it is actually possible to sustain a range of different interests alongside one another without being totally consumed by one at the expense of all others, and that it is possible to take an interest in model railways without necessarily having to own a model railway or be in the process of building one.

All of which is, I am certain, absolutely obvious stuff to most people, but somehow it wasn't obvious to me until these last couple of years!

Thankfully my haste to rid myself of all my model railway 'stuff' didn't go beyond selling my small collection of RTR locomotives and rolling stock and a couple of other bits - all of which are easily replaceable if ever I decide to get back into active modelling. The rest is boxed up in the attic (when our second child arrived in 2014 the 'railway room' was taken out of service as such and converted to more pressing needs!)

One thing I came extremely close to selling but which I am extremely glad I didn't end up parting with is my Model Railway Journal collection. I went so far as to list the entire lot on eBay back in 2011, but thankfully they remained unsold and I still have them all. In fact I have now brought the collection up to date with the issues I missed out on over the last few years. I've also extended what was at that time an embryonic collection of Great Western Railway Journals into a complete set (most of which I haven't yet read, but just owning them gives me a sense of great satisfaction!).

I was interested to read in the recent obituaries to Bob Barlow that for many years, even when he was involved with MRJ itself, he never had his own model railway, so I don't feel so bad about claiming an interest in something to which I can't attach any great exhibition-piece of my own handiwork.

Henceforth I am quite content to be known as the eponymous 'armchair modeller'. I won't be making any commitment to writing on here regularly - or at all - but neither will I avoid doing so if there is something I feel inspired to comment on, be it one more than or 5 years from now, so the blog remains 'open for business' at least in the 1960s branch line sense whereby there might not be much 'business' happening for very long periods of time! Whether I return to active modelling at some point in the future who is to say, but that really matters little at the end of the day - there's no compulsion to have to do anything.
Posted by Matt at 11:30 pm 3 comments:

Currently for sale on eBay... 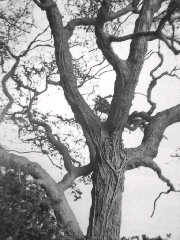 Well, how about that... you wait 8 months for a blog post to come along and then two turn up together! And this one after I had effectively announced my temporary withdrawal from the hobby yesterday!

Anyway, my wife kindly picked up the latest issue of MRJ for me while out shopping so I've spent a pleasant couple of hours this evening perusing its contents.

In my usual non-conformist style, the thing that grabbed me the most in the whole magazine is the full page advertisement for Gordon Gravett's new book (published by Wild Swan - who else?) called 'Modelling Trees - Part 1: Broadleaf Trees'. The cover picture, reproduced in the ad, is just breathtaking (at least if, like me, you're as bothered about the realism of things like trees as you are with crossing vees and coupling rods!). Naturally it's gone straight on my Christmas list.

Talking of Christmas lists, and somewhat off the subject... I've been considering investing in one of those Noch Grasmaster static grass applicators. I know they're ridiculously expensive for what they are and I know I said I wasn't going to be doing any modelling, but part of me still hankers after being able to play around with the odd little scenic cameo piece - you know, just a few square inches, a bit of grass, a tree...

But that reminds me... I'd better get on and update the MRJ Index with this new issue...
Posted by Matt at 9:37 pm 2 comments:

I realise it's been many months since I last posted here, and even more since I wrote anything directly modelling-related. The short version of the story is that I've realised I just don't have the time (I've only found the time to write this because I'm off work sick!) or space for modelling at this point in my life and so the project I had been working on bit by bit over the past few years has been shelved - or more accurately, put in the loft - for the foreseeable future.

But what has led me to this decision? And how is it that others seem to manage to juggle the demands of daily life and the constraints of time, space and money with a successful sideline in modelling, while it has proved so difficult for me? I can't fully answer that other than through the old cliche that 'everyone is different'. Personally, while I could in theory make time for modelling, it's either time that I know should be spent doing other, more important things, or time that I'd rather spend doing other, equally non-important things!

My weekends generally tend to fill up with family activities and jobs around the house and garden. And on weeknights, once our 3-year-old is finally in bed and asleep, the only thing I'm good for is crashing in front of the TV for an hour or so until my eyes are too heavy to keep open!

Another problem is that I can't just 'dip in' to a bit of modelling when I have a few spare minutes, because there's nowhere that I can leave things permanently set up. With a 3-year old roaming the house, you just can't leave bottles of thinners, flux, soldering irons, paint, super glue, scalpels, etc lying around on a table  - unless maybe you're fortunate enough to have a dedicated room you can lock up between shifts - which we don't! And coupled with that, I'm excessively tidy - so the mere thought of having a great pile of bits and pieces just 'left out' somewhere bothers me too much, especially when the only possible bit of space doubles as an office, computer room, library and walk-in wardrobe!

The result is that an hour of modelling often requires the best part of an hour just to get everything out, set up and ready, and clean up and tidy away afterwards. And that's time I've just not got.

Coupled with these practical considerations, I do think that my decision to 'go P4' probably didn't help things in the first place. Even if you don't factor in the additional time and effort required to re-wheel RTR locomotives and stock, the overall ethos of trying to get everything as close to perfect as possible ('getting it all right'), while appealing to a perfectionist like me, also has tended to put the brakes on any kind of 'just get on with it' kind of approach that, while it carries with it the risk of failure, is much more likely to lead to some kind of end result than the kind of endless faffing about that has been the name of the game for me!

I'm not knocking P4 or suggesting that others shouldn't go down that route - just that it probably hasn't helped in my case! I'm not the sort of person who can just whack in some replacement wheels and leave it at that - frames have to be widened, brake hangers have to line up properly... the very things that 'getting it all right' is all about really. And as I found with the Bachmann 45xx, what might have seemed like a relatively straightforward task of replacing the wheels ended up becoming a long and tedious process that never got finished.

I look at the models of Chris Nevard and others who have stuck to 00 gauge and embraced the compromises, and realise that once you accept that there will be a few details that don't quite measure up to the real thing, you can still achieve something that looks and works remarkably well. In fact, if I could build something that looked half as good as some of Chris's creations, I'd be more than happy! That said, I don't see switching back to 00 at this point is going to really help with the other, more pressing issues.

So for now I'm just embracing the title of 'Armchair Modeller' and getting on with life! Even if I don't post on here very often for the foreseeable future, this blog will remain up and running. Hopefully at some point I'll find I'm able to pick up the modelling again and continue the story.
Posted by Matt at 2:27 pm 6 comments: